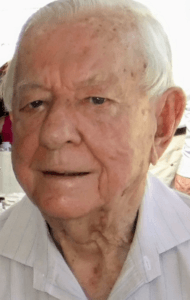 In the light of the COVID 19 pandemic, Rotary Ashgrove the Gap has made a decision to postpone OS SMITH COMMUNITY AWARD till later in the year.

At that stage, our committee will review the situation and decide on a possible timeline for its commencement, depending on the latest government’s update on COVID 19 risks.

I am sure you would understand that Rotary had to make this decision in the light of the PM’s announcements meetings, etc, due to COVID 19 pandemic. We are also mindful of that at this stage people are most likely to be focused on their immediate challenges, and not have the time, resources or energy to think about new projects/ initiatives that may meet the Os Smith Award requirements.

Os Smith was long term resident of The Gap, who was one of the founding members of the Rotary Club of Ashgrove which later became Rotary Ashgrove The Gap.  Os was Club President on 2 occasions and was our longest serving member, almost half a century.

Whether he volunteered for our flagship projects such as Santa Sleigh, Carols in the Park, GRIPPS or mentoring our youth or supporting their developments in music, science or leadership, Os Smith was always there giving a helping hand. Os was a true Rotarian with a ready smile, with a self-deprecating sense of humor and a warm personality. He strongly believed in and demonstrated Rotary’s philosophy of “Service Above Self”.

In recognition of his long-standing contribution to the Club’s various services over several decades, Rotary Ashgrove The Gap has established the Os Smith Community Award in the memory of Os Smith, who passed away in April 2019.

$2,500 will be awarded to the successful applicant.

Any registered not-for- profit community organization from Ashgrove, The Gap and surrounding suburbs, whose primary goal is community service.

A Project that addresses one of more social and community needs, such as improving mental and social well being in the community including for children and young adults, victims of domestic violence and senior citizens.

Applications can be posted to:

The closing date for applications To Be Advised.

The winner of the award will be announced at the Awards Night to be held at Bronco’s Leagues Club on a date to be advised.